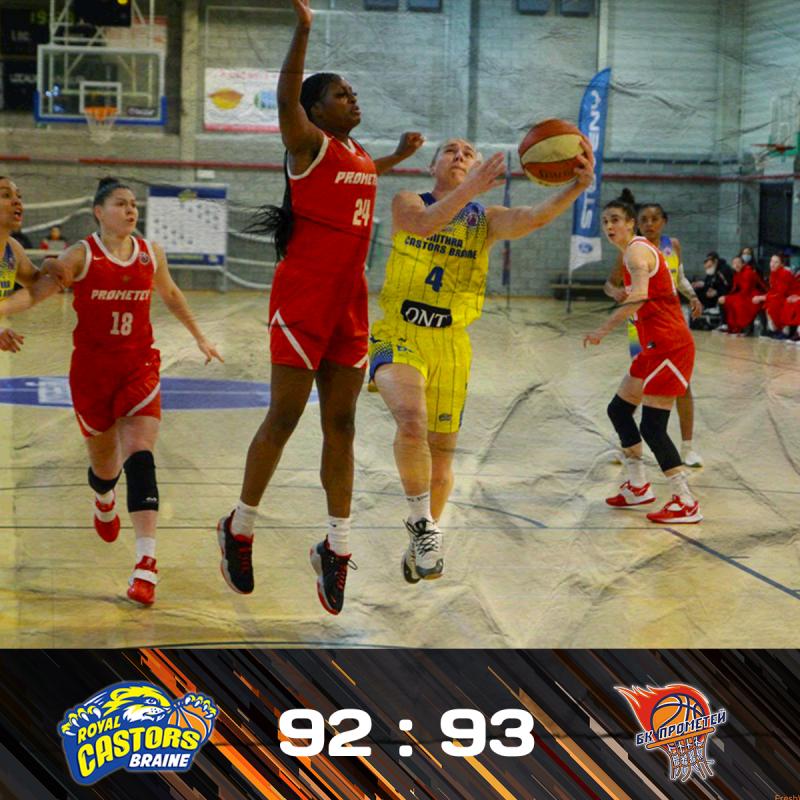 The participation of the women's team "Prometey" in the 1/8 finals of EuroCup Women should be regarded as a real achievement not only of our club, but also of all domestic women's basketball. However, Victoria Bolshakova's team was so confident in the previous stages of the tournament that their stay in the company of the top 16 teams is not the limit. These impressions were fully confirmed by today's away match against the Belgian club "Castors Braine".

The champions of Ukraine started the match with a 6:0 jerk in the first minute and a half. In the future, our team, whom Olga Dubrovina could not help, did not lose initiative during the first half of the confrontation. Nikolina Babic entered the game from the bench very well in the starting ten-minute period. Within seconds of appearing on the field, she issued an end-one, and first scored while the falling. Then, before the first break, the Bosnian guard scored 8 more points (two shots from the perimeter). The players of "Castors Braine" played a lot in our three-second zone Quinn Dornstauder (9 points in the quarter), but all their efforts only led to the fact that the team was just getting closer to the champion of Ukraine.

Victoria Balaban (27:18) put an end to the first quarter with a three-point shot, and in the second ten minutes Victoria Bolshakova's team reached the "10+" handicap twice. Successful play of rivals on the perimeter did not allow to develop this precedence (4 hits from 8 in 20 minutes of the match). As a result, "Castors Braine" managed to win a quarter and go to the long break at a perfectly acceptable gap of 7 points.

In the third quarter, the fight on the field intensified. When in the 25th minute Dornstauder calmly scored from under the rings, the teams had a gap in only 1 point (54:53 in favor of "Prometey"). At a rather tense moment, Prometey had three-point shots (Atkins, Babic, Rymarenko), and at the end of the quarter, five consecutive points by Victoria Balaban allowed our team to break away by 12 points. Before the last break, Castors Braine managed to reduce this gap by 4 points, and in the 37th minute, the Belgians, due to the great efforts overtook our team - 85:85.

The fate of the over-tense confrontation was determined in the clutch. At the last minute, the opponent was already leading by three points (92:89). Ariel Atkins, by the accurate shot from the perimeter, equalized the score, and then our team managed to defend. Before the siren, Ariel stood on the free-throw line and made the second attempt - the victory of "Prometey" in the first match with a score of 93:92! The second match will take place in Slobozhanske next Thursday, January 20.